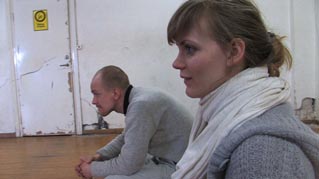 "Untitled documentation I" is based on the performance "mad" from 2001. The performance was a large success in Norway and Sweden and was the starting point on a professional career for many of the at the time untrained actors. The same group of people met in 2007 to document the performance, the process, the friendships and familiarity that took place six years earlier. The video portraits the now established actors encounter with the characters that had meant so much to them, filled with the seriousness and maturity of the coming of age, and how nostalgia in interaction with method acting blurs reality.